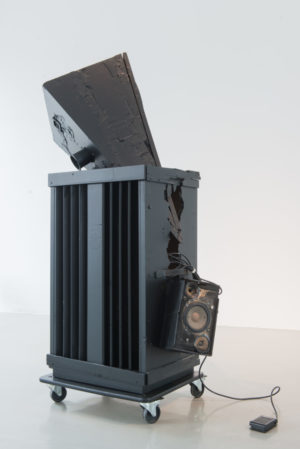 View cart “Warren Neidich, The Infinite Replay of One’s Own Self Destruction #1” has been added to your cart.
VIEW CART

Blanqui’s Cosmology is a series of photographs, the title of which refers to Louis-Auguste Blanqui, a French revolutionary whose attitude and ideas got him arrested in the prison for many years, solitarily confined in a darkened cell. In prison, Blanqui wrote a cosmology according to which all bodies, animate and inanimate, are linked to one another. Warren Neidich’s series comprises of more than 1.200 long exposure shots of heads. Silhouettes emerge from the darkness wherever the artist’s pen light touched the heads of his subjects – creating shapes, which seem to float in an infinite cosmic space, but also evoking scientific imagery such as x-rays of sculls. Neidich’s photographs hark back to the beginning of photography and the early history of portraiture, while their titles evoke Buddhist mind-sets and meditation techniques, which are believed to guide the way to illumination. (Ann-Katrin Günzel)

Be the first to review “Warren Neidich, Satipatthana” Cancel reply