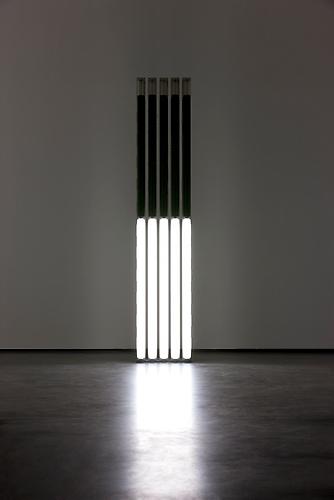 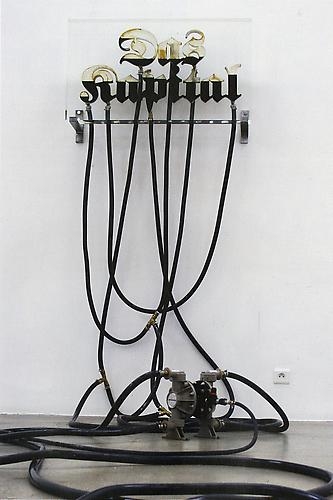 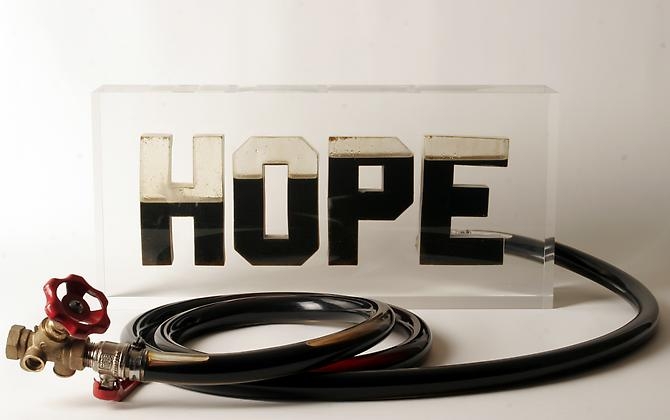 Born in 1966, Andrei Molodkin attained international recognition in recent years owing to his politically motivated crude oil sculptures and large-scale ballpoint pen drawings and is to represent Russia this year at the 53rd Venice Biennale.

Andrei Molodkin’s sculptures consist of transparent Plexiglas structures that are hollowed out inside in the form of a phrase or sculpture. Using connected pipes, the artist then fills this matrix with crude oil from Chechnya, Iraq or Iran.

In his sculptures, Molodkin uses words and shapes that play a central role in political, economic or religious issues. He sees phrases or slogans such as ‘Hope’, ‘Democracy’, ‘Das Kapital’ or ‘Yes we can’ as empty vessels that can be filled in very different ways depending on the context.

Into these moulds, Molodkin injects crude oil – one of the world’s oldest raw materials yet the lifeblood of today’s economic system.
In this way, Molodkin initiates a political and cultural discourse in which the terms used – and, in turn, man’s cultural heritage – are replaced by ‘black gold’ as the central commodity.
Words such as ‘hope’ are – and always have been – used and abused by political and religious leaders and their agents. By filling these with crude oil, the artist highlights the radical extent to which economics has penetrated and dominated culture and politics.
In a time in which words are used as vessels into which equally empty ideologies and discourses can be poured, Andrei Molodkin sees not only his works of art but also culture as a whole as being filled with “an emptiness that we have to fill and affirm with economics”.

By making crude oil a key part of his art, Andrei Molodkin transforms this essential industrial raw material into an aesthetic form. Besides the aspect of increasing the (mercantile) value of a material that is rarely used in art, Molodkin sees the fuel – which, after all, is derived from long-dead organisms – as symbolising the cycle of life and death, a theme that is also addressed in his drawings.

Molodkin’s relationship with crude oil began back in his army days, when he was given the task of accompanying gigantic oil cisterns that were being transported to Siberia by rail, using residue from the containers as a means of keeping warm. Later on, when working on a photography project in Northern Russia, he came into contact with the giant crude oil cisterns which he found to look like cathedrals on the inside. This reminded the artist of reports in the Russian media describing crude oil as the “flesh and blood of the nation” and inextricably linking national resources with the national identity.

It was during his time as a soldier that Andrei Molodkin began his ballpoint pen drawings. These large-scale drawings frequently feature a death’s head as a motif. As well as using the iconography of death, the time-consuming process involved in producing these works also brings together life and death: on the one hand birth in the creation of the picture, the entire evolution of which can be traced through ballpoint pen strokes, and, on the other, death symbolised by the completion of the work.

Molodkin creates ballpoint pen drawings with specific political or economic references – a prime example of this is ‘Gazprom’, which depicts the headquarters of Russian energy group Gazprom.

Andrei Molodkin’s latest project has generated extensive media coverage, with newspapers such as the Independent, Artinfo, the Evening Standard and The Times reporting on Molodkin’s intention of continuing to use the notion of crude oil to symbolise the cycle of life and death.

(1985-1987 College of Arts, Krasnoe-on-Volga), and the
(1987-1992). Faculty of Interior Architecture of the Stroganov Art Academy, Moscow. Military service (1987-1992).
The artist has had his works featured in many individual and group exhibitions in Western and Eastern Europe and in the USA. In 2009 he represented Russia at the 53rd Venice Biennale and in 2012 the museum Villa Stuck, Munich, presented a major exhibition with his work in.
Furthermore, his works have been covered in publications such as Art Forum, Art Press, Third Text, Kh/Zh, the New York Times, the Village Voice and the Independent.