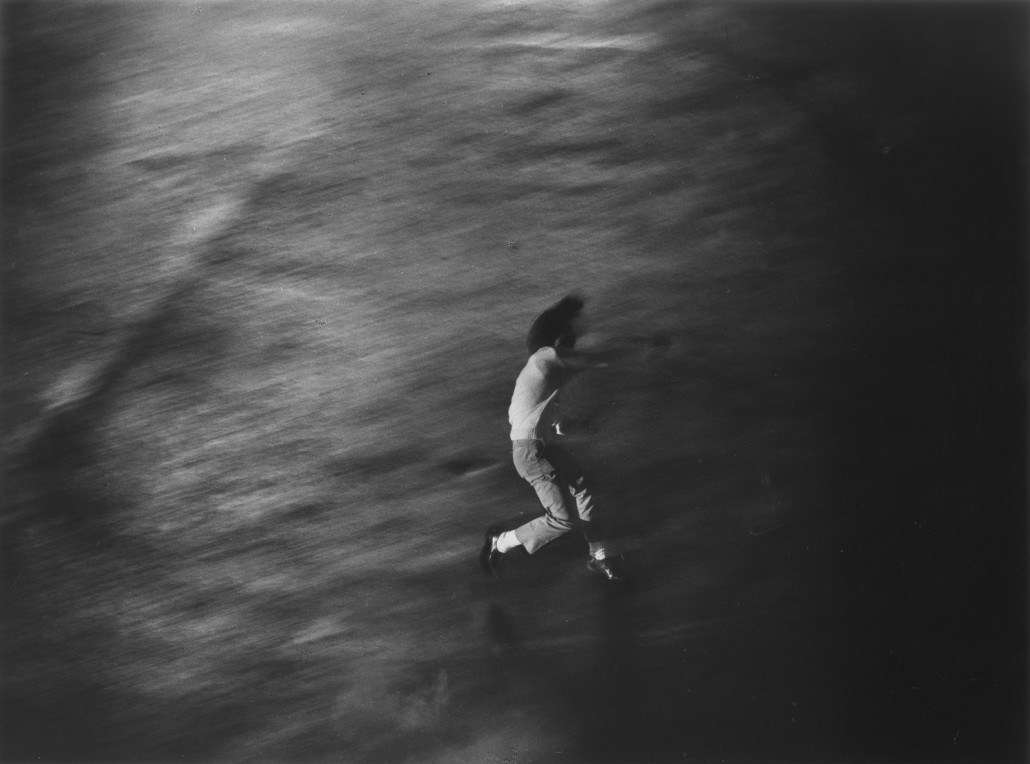 The economic upturn of the 1960s, which established Japan as the third-largest economic power on Earth, took its toll on Japanese society. Particularly in the major cities, the boom led to the decline of traditional structures which in turn left a feeling of uprooting and perspectivelessness among the younger generation.

Especially in the universities, a fundamental opposition developed against the new political, economic and cultural structures that had emerged in the post-war period. In 1968, the resistance manifested itself once again in student protests against the pending extension of the “ANPO” security pact and the Vietnam War.

The sense of alienation and rootlessness felt by the young generation found artistic expression above all in photography from the end of the 1960s. (See also: Charles Merewether: “Disjunctive Modernity. The Practice of Artistic Experimentation in Postwar Japan”, in: Art, Anti-Art, Non-Art. Experimentations in the Public Sphere in Postwar Japan 1950-1970, Los Angeles 2007, pp. 24-29.)

This phase of the upheaval was documented by Shomei Tomatsu in his photo book Oo! Shinjuku. A resident of the Shinjuku district, he zoned in on the public and private lives of the young generation and the student protests which began in Shinjuku.

In the 1960s, Tomatsu had risen to become Japan’s leading photographer and, since his time at VIVO, was both mentor to and role model for the up-and-coming generation of young photographers. In 1968, Shomei Tomatsu took over the organisation of the first major retrospective exhibition of Japanese photography entitled “One Hundred Years of Photography: A Historical Exhibition of Japanese Photographic Expression”.((In this regard, a leading role was assumed by the Japan Professional Photographers Society. 1,500 photographic works were chosen out of some 500,000 submissions, and were exhibited in the Seibo Department Store in Ikebukuro, Tokyo, in June 1968.)) Among others, Tomatsu engaged Koji Taki and Takuma Nakahira, the young editor of the Gendai no me (Modern Eye) magazine, to work on this exhibition. Under Tomatsu’s influence, Nakahira had begun to practise photography in the mid-1960s, learning the required techniques with the aid of Daido Moriyama. (Ibid. p. 56, and see Akihito Yasumi: “Journey to the Limits of Photography: The Heyday of Provoke 1964-1973”, in: Christoph Schifferli (editor): The Japanese Box, Paris/Göttingen 2001, p. 12.) However, in the course of the preparations for the exhibition and the attendant discussions about the state of Japanese photography, Nakahira, Taki and others began to distance themselves from Shomei Tomatsu’s documentary yet symbolically charged approach to photography. (Ibid. p. 55.)

The exhibition on the history of Japanese photography opened in June 1968; shortly afterwards, in October of the same year, the youth revolt culminated in the anti-war demonstrations, which involved severe clashes. November 1968 also saw the appearance of the first issue of photo magazine Provoke, with which photography established itself as the medium of artistic expression at the end of the 1960s. (See. Charles Merewether: “Disjunctive Modernity. The Practice of Artistic Experimentation in Postwar Japan”, in: Art, Anti-Art, Non-Art. Experimentations in the Public Sphere in Postwar Japan 1950-1970, Los Angeles 2007, pp. 24–29.) The work of the photographers involved in the magazine was so powerful that its aesthetic approach is still used to this day by Japanese and Western photographers, notable examples being the works of Osamu Kanemura and Antoine D’Agata.

Provoke was founded by Takuma Nakahira, his friend Yutaka Takanashi, critic Koji Taki (1928-2011)((Obituary on Koji Taki at Art It online magazine, 2011.)), and poet and critic Takahiko Okada (1939-1997). The first issue began with the Provoke Manifesto, signed by the four founders and postulating the alienation of language and reality and identifying photography as the medium that was capable of conveying reality – even if “only a fragment”. For the Provoke artists, the photographic image existed as “provocative documents of thought”, transcending language and ideological baggage:

“Today, when words have lost their material base – in other words, their reality – and seem suspended in mid-air, a photographer’s eye can capture fragments of reality that cannot be expressed in language as it is. He can submit those images as documents to be considered alongside language and ideology. This is why, brash as it may seem, Provoke has the subtitle ‘provocative documents of thought’.” (Provoke No. 1, p. 1. Translation from: Gerry Badger: “Image of the City – Yutaka Takanashi’s Toshi-e”, in: Yutaka Takanshi. Toshi-e (Towards the City). Books on Books 6, New York 2010, unpaginated.)

At Nakahira’s invitation, Daido Moriyama came on board for the second edition. Only three issues of the magazine were published in 1968 and 1969 in a small print run, and the group disbanded in early 1970. However, there followed three books by Takuma Nakahira (For a Language to Come), Daido Moriyama (Bye Bye Photography) and Yutaka Takanashi (Toshi-e – Towards the City), cementing the status of the ephemeral Provoke movement as a milestone in photographic history.

The magazine helped to establish a style which deliberately broke all the rules of traditional documentary photography. True to the concise Japanese description “are, bure, boke”, the photographs of streets, people and landscapes are indeed “grainy, blurred and out of focus”, canted images with stark contrasts. The primary purpose of these photographs is no longer to communicate information, but rather to convey atmosphere and raw energy.

To begin with, Yutaka Takanashi was shocked by the radical new aesthetic, which was propagated above all by Takuma Nakahira and Daido Moriyama. (See Rei Masuda: “Field Notes of Light”, in: Yutaka Takanashi. Field Notes of Light, exh. cat National Museum of Modern Art, Tokyo 2009, pp. 144-149, here p. 145.) However, as he himself was unhappy with the artistic options that had existed to date and was actively looking for a new aesthetic, Takanashi assumed the raw style of his two fellow artists:

“Photography was too explanatory, too narrational for me. […] It was natural for me to join Provoke. […] They said they were photographing atmosphere. But I was very precise and careful. […] But my work changed after I saw how they worked. I saw that I could not control everything. I understood that photography is only a fragment. I used to be a photographer who interprets things via language. And then Provoke changed me.” (Yutaka Takanashi, in: Déjà-vu, no. 14, Tokyo 1993.)

Nonetheless, Takanashi continued to see the photograph as conveying more than mere atmosphere and even after adopting the Provoke style, his works retained a rational, intellectual component.

This was evident in 1974 in his principal work Toshi-e (Towards the City), on which he worked in the years after the end of the Provoke group in 1970. Both internal and external reasons can be said to have led to the disbanding of Provoke. From the outset, it was a group of individuals brought together by a new idea for the medium of photography, but who set off in different directions again after working
((In the foreword to the third and last issue of Provoke magazine, Koji Taki wrote: “The photographs by the four photographers shown here are very different, and they share nothing, methodically speaking. On the contrary, they clearly conflict.” In: reference as above: Yasumi: Journey to the Limits of Photography, page 17.)) At the beginning of 1970, the social and political crisis had come to an end, and with it the era of change in Japanese society. The student demonstrations had been quelled by the Japanese authorities, the “ANPO” security pact between Japan and the USA was to be extended, and the New Left withdrew in frustration.

Vernissage – PIETER HUGO, Between the Devil and the Deep Blue Sea, Freitag,...