Ulrike Rosenbach (born 1943) is one of the main pioneers of performance and media art. Since the late 1960s, she has been creating experimental works with photography, performance, video and multimedia installations.
Back in 1969, Rosenbach – studying under Joseph BEUYS at the Düsseldorf Art Academy – founded a group of female artists with ties to the American Women’s Liberation scene. In 1970, she was invited by Lucy LIPPARD to the first major American art exhibition to feature only female artists “1000 miles from here“. In 1973 she performed her first video life performance in New York. From 1975 to 1976, she taught at the California Institute of the Arts (CAL Arts) in Los Angeles, one of the most progressive art institutes in the US, where also John BALDESSARI taught at that time. In this period and context, she was inspired to create important groups of works dealing with topics like traditional role models of women and their trivialization in the mass media. ULRIKE ROSENBACH’s themes are as highly topical and relevant as ever today. Her innovative works have been showcased at international exhibitions as well as at documenta 6 (1977) and documenta 8 (1987).
Her rare vintage photographs of the famous Elvis variations „Art is a Criminal Action“ from 1969 as well as recent photo prints on canvas receive a lot of attention. The complexity and relevance of her drawings and collages on paper, which have accompanied her media works since the beginning of her career also deserve a closer look.

Daniel Kothenschulte (born 1967) is a film and art critic, book author and curator. He is responsible for the film section in the feuilleton of the Frankfurter Rundschau and a regular contributor to Monopol magazine. He regularly appears as a reviewer on Kulturzeit/3Sat. As a curator he worked on exhibition such as “Stanley Kubrick” (touring the world since 2003), “The Art of Pop Video” (MAK, Cologne, FACT, Liverpool, 2013). He co-founded and curated the festival Videonale Scope that hosted veteran film artists such as Jonas Mekas, Birgit Hein, Wilhelm Hein, James Benning and Lutz Mommartz.
He founded the project “Silent Movie Theatre Cologne”, which regularly holds forums on early films, with live music. As a book author he wrote monographs on Robert Redford, Hollywood in the Thirties, Fritz Lang’s Metropolis and The Walt Disney Film Archive. Lecturer on film art, among others, at the Städelschule in Frankfurt, the University of Applied Sciences and Arts, Dortmund, the University of Television and Film Munich and the Mumbai Film Festival. He has taught at various universities including Städelschule, Frankfurt, Film Academy Munich, and Johannes Gutenberg Universität, Mainz. Most recent publication: Walt Disney. The Ultimate History, Taschen, Cologne, 2018.

Warren Neidich | NEUROMACHT – Noise and the Possibility for a Future

Artistic interventions create new connections in the world as well as in the neural plastic brain. This is the power of Art. (Warren Neidich)

In his artistic practice, Warren Neidich (*1958, New York), author, art theoretician, and interdisciplinary post-conceptual artist, concerns himself with the ways in which these conditions have altered our habits of perception and conception. He combines his studies in art, neuroscience, medicine, and architecture to question technology’s role in “sculpting the brain” as a force with the potential for repression as well as emancipation.
His exhibition NEUROMACHT – Noise and the Possibility of a Future at PRISKA PASQUER in Cologne, Germany, presents installations, sculptures and performance including various media like neon, photography, video, noise, and painting. A number works will be featured. Pizzagate (2017) is a large-scale neon sculpture shaped like the iCloud logo and diagrammatically configured as a network. The Infinite Replay of One’s Own Self Destruction, #1 and #2 (2014) consist of broken speakers that emit a cacophony of noise. In his improvisational performative work Scoring the Tweet(s) (2017), he uses a cut and paste method first devised in Surrealism and later in the works of William Burroughs, to alter and rearrange the one hundred and ninety-six tweets of Donald Trump that mention fake news to create a graphic score. This score was installed for its performance at PRISKA PASQUER in the evening of May 12, 2018. In Double Vision – Louse Point (1997-2000), a series of photographs were made with apparatuses of neuro-ophthalmology that are used in the assessment of squint, which are then superimposed over the photographic camera lens producing what Neidich calls a “hybrid dialectic” in which two parallel historical, material trajectories are intertwined on the surface of the resulting colour photographs. Works of art history also become reference points in the Wrong Rainbow Paintings (2012-14), which are based on historic landscape paintings such as those in which the artist purposefully misrepresents the colours of the rainbow. Double Sausage Tango (2018) is based on an artificial neural network that causes a switch from a blue flaccid sausage to an erect red one. The two sausages are connected by hidden intermediate links, which are formed from found vintage neon.

Warren Neidich lives and works in Los Angeles and Berlin. He has taught at Berlin’s Weissensee School of Art since 2016. In 2014, he established the Saas-Fee Summer Institute of Art (SFSIA) in Switzerland, a summer academy that has been based in Berlin since 2016. He is visiting scholar at Otis College of Art and Design, Los Angeles His awards and fellowships include studio fellowships at Künstlerhaus Bethanien, Berlin, the Villém Flusser Theory Award, Transmediale Berlin, the AHRB/ACE Arts and Science Research Fellowship, Bristol, the British Academy Fellowship in London, the International Artist Studio Program in Sweden (IASPIS) and the Fulbright Scholar Program, American University, Cairo.

TRANSITION / NEUROMACHT – Noise and the Possibility of a Future

SYMPOSIUM | NEUROMACHT: Noise and the Possibility for a Future

Music is prophecy. Its styles and economic organization are ahead of the rest of society because it explores, much faster than material reality can, the entire range of possibilities in a given code. It makes audible the new world that will gradually become visible, that will impose itself and regulate the order of things. (Jacques Attali, Noise: The Political Economy of Music)

Noise is prevalent in our post- industrial society; whether it be the cacophony of the factory and the war machine that initially inspired the Futurists such as Luigii Russolo, the dissonance of the public space which encouraged indoor living in earlier times and noise barriers along the highway today or that excess which diminishes efficiency in communication network systems, the so called Shannon’s Theorem or the noisy –channel coding theorem. Noise gets a bad rap as something considered offensive and that needs to be controlled or mitigated. However, noise has another side more positive and emancipatory. This conference utilizes the history of noise and music to stake a claim for noise as a liberating mode of production while at the same time understanding its dystopian possibility “ that mode of productions baleful mirror image.” (Frederic Jameson, Introduction in Jacques Attali, Noise: The Political Economy of Music)

TRANSITION / NEUROMACHT – Noise and the Possibility of a Future

In his improvisational performative work Scoring the Tweet(s) (2018), Warren Neidich uses a cut and paste method first devised in Surrealism and later in the works of William Burroughs, to alter and rearrange the 196 tweets of Donald Trump that mention Fake News to create a graphic score. The musicians are instructed to visit each score at designated times and perform it.

Under the extended title TRANSITION / NEUROMACHT – Noise and the Possibility of a Future this installation brings the current exhibition to a new level expressing the power of poetry and improvisation as form of political resistance.

“How can a musician have a conversation with a noisy machine?
And what are the sociopolitical consequences of such a conversation?”

NEUROMACHT Noise and the Possibility of a Future

Identity or picture? Simulation, hyperreality, illusion or deception?
In what kind of a world do we live and what pictures do we see? 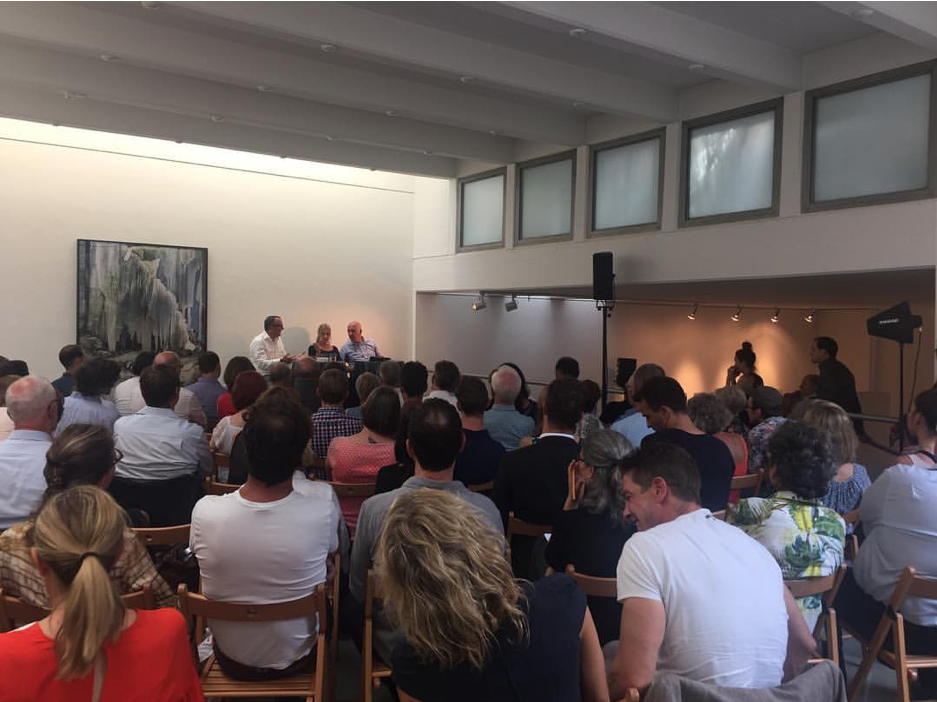